In typical Stafford, we tend to “outwardly focus our aggression on inanimate objects” which leads to a bunch of do it yourself projects and tedious chores that drag on for months.

Case in point: Our HP 600 DeskJet printer… A very nice printer indeed, but when it started acting up, I went on a slow boil for about 4 weeks… And then one day I had finally had enough, and I threw the bastard in the pool: 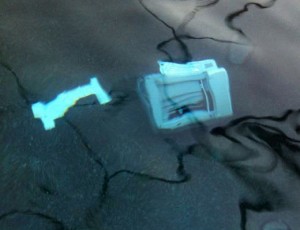 It sat there for several days and finally, I pulled the fucker out…

And then we went printer-less for several weeks, until I managed to drag my ass to Best Buy and grab a new one. Not very efficient.

The same thing’s happened here recently with the shelves in our laundry room.

The jackhole who owned our house before us had drilled the screws into dead drywall, not into the wooden studs, and so of course the shelves couldn’t hold anything.

When I finally had enough with watching them sag and rip out of the wall, I ripped them out of the wall yesterday, and threw them in the pool. Selah.

Who knows how long it will take to build nice new stained wood shelves, like the ones I found here:
http://diydiva.net/2011/08/organization-101-building-basic-wood-shelves

But who cares? Why not go for it, right?

After all, it’s our house now…

So if the kitchen seems too dark and we gripe about it for several weeks… Why not encourage my daughter to finally put a hammer through the wall so we can build a breakfast bar?

For the record, it’s really opened the kitchen up…

And I guess we’ll just deal with the dust and exposed framing until I can figure out what’s next.